Last summer was a time of leaving and returning for me, of going home and leaving homes behind. Much of my now year-plus journey has been an exploration of what “home” is–how to feel at home where you are, what it means to have multiple homes, how to process conflicting feelings about “home,” belonging, and unbelonging.

I’ve also been learning how “home” often consists so much more of the feeling I get with certain people than it does with any particular place. Yet, at the same time, I know there are distinct places that resonate with me, places where I feel in step with the world somehow, sometimes for unknown reasons. And then there are homes I’ve left behind, thinking they weren’t mine, and upon returning, I have been surprised to find that “homeness” intact, and I have been left thinking, Yes, this is my place.

My reading list over the last six months has, without intention, reflected many of these ruminations and complications. And in some ways, the ways I found these books reflect my own wandering: I picked up two of them after hearing the authors speak at the Adelaide Writers’ Week in Australia last spring. Another I’d intended to read for a long time, but over the summer I found it on the shelf of an English professor friend who I was housesitting for in South Carolina. Another was left for me in the car I borrowed from a dear friend in South Carolina when she moved back to South Korea. Still another, I simply stumbled across.

These are stories of returning to homes and seeing them in new lights, of being exiled from the people and places we call home, of having a home but not feeling at home in it, and of having your home destroyed and changed–and making due as you can. I hope these books might give you glimpses into other worlds and perhaps help you along your own journeys to and from home.

Do Not Say We Have Nothing, Madeleine Thien

While I learned about the Tiananmen Square massacre in middle school (we read a novel set there when I was in seventh grade), I knew very little about China’s Cultural Revolution. So when I heard Madeleine Thien, who was at the Adelaide Writers’ Festival, talk about how almost all music was outlawed in China during that time (except for a handful of government-approved songs), I was both horrified and intrigued, particularly as one of her characters is a composer. As a musician myself, I wondered how I would cope in a world without music, what I would do if something that enriched my life so much was taken away. I wondered how a government could manage it–that erasure of culture, of music, of art, of literature–and what vast effects such a move must’ve had on the generations that followed.

Thien’s book is an exploration of just that. Nominated for the Man Booker Prize, Do Not Say We Have Nothing follows the journeys of its characters through love and loss during China’s Cultural Revolution and its far-reaching aftermath. From a Chinese defector who flees to Canada after the massacres near Tiananmen Square in 1989 to young composers and musicians forced to abandon music during the Cultural Revolution in the 1960s and 1970s, readers are drawn into shifting and intersecting worlds of danger, loss, coming, and going amid the love, friendship, and family bonds that hold people together. With beautifully drawn characters and a compelling narrative that delves both into the personal and political, Do Not Say We Have Nothing is one of the best books I read this year, and I’d recommend it to anyone.

How I Became a North Korean, Krys Lee

I’d been eyeing this book for a while, but after I saw Krys Lee speak at Adelaide Writers’ Festival in Australia and livetweeted about everything she said, I decided to track it down. Largely set in China near the North Korean border, How I Became a North Korean follows multiple characters on their journeys of exile from North Korea and their attempts to escape the regime, including Jangmi, a pregnant defector who is forced into sex work, and Yongju, a young man whose family was once in the upper echelons of North Korean society and politics. Most interesting and accessible, though, is Danny, a Bible-toting young man who is an ethnic Korean from China but grew up in California. Through a series of misadventures, Danny ends up in China without a passport and offers an outsider’s look into the world of the North Korean migrants as he navigates his own struggles with faith, sexuality, and identity.

How I Became a North Korean offers insight into the struggles of defectors from this regime, but importantly, it’s not just about how awful North Korea is. In the end, as characters make and remake themselves and their relationships with one another and the places they live, we find that North Korea isn’t the only villain and sometimes our heroes aren’t who we expect them to be.

Narrated through the lens of the youthful Esperanza, The House on Mango Street tells the story of a young Latina girl who comes of age in a house and neighborhood she only dreams of escaping. Told in a series of short chapters that act as vignettes, we get both a sense of Esperanza’s desire to leave the low-income, predominantly Latinx neighborhood in Chicago where she lives as well as the connections she forms to it. We also get a sense of the worlds that Esperanza straddles and the borders she continually crosses as she moves deftly from Spanish to English, her neighborhood to the school, the world outside to the world within.

Through her childlike narration, we get glimpses of her family’s joys and struggles, her neighbors’ day-to-day lives, and her own movement from childhood into adulthood. And “glimpses” are perhaps an appropriate word for these stories–most of them are brief, and yet taken together, they offer a full picture of the protagonist, her fears, and her dreams.

Published in the 1980s, The House on Mango Street is considered a classic and taught throughout a number of schools throughout the U.S. Yet, it’s still very relevant to today’s discussions on Latinx and Mexican-American culture, feminism(s), and intersectionality. So if you’re looking for an engaging narrator, fiction about Latinx culture, or a book on home, this one’s for you.

The Faraway Nearby, Rebecca Solnit 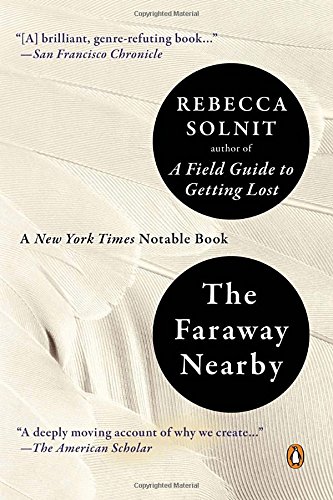 Originally, I was searching my library’s electronic books section for Men Explain Things to Me, Solnit’s feminist treatise that has been all the rage among my feminist friends. On the way, I found this and decided to give it a read.

The Faraway Nearby is a book of lyrical essays that traverse space, place, and time. Interweaving history, mythology, and story with her own struggles with a mother who has dementia, Solnit draws us into those moments of emotion that make human experience via her circling of the philosophical, wondering about nature, and examining her own lived existence. It’s a lovely, evocative portrayal of the complicated nature of our most intimate relationships made only more meaningful by her opening of the narrative to examine the broader world.

Honestly, this novel made me really sad, but I think it offered me an important, if fictionalized, glimpse into everyday life in Afghanistan and the twists and turns the country has taken over the previous decades.

Told from the perspectives of two Afghan women, we follow our two protagonists from childhood into young adulthood as their paths move ever-closer to convergence. The novel opens on Mariam, a young Afghan teenage girl born out of wedlock who is trying to form a relationship with her father, who is married and has wives and kids of his own, and to escape the small, impoverished home of her mother. Her attempt to escape leads her down innumerable difficult paths that continue to confine her to a life she dreams of escaping, including an abusive husband in Kabul, a city far from the small village where she grew up. Laila grows up down the street from Mariam in Kabul and receives many of the things Mariam has not–a loving family, an education, a chance at love. Yet, escalating violence during the Afghani war with the Soviets brings her world crashing around her and draws her into Mariam’s world in ways neither had ever expected.

A story of exile, of entrapment, and of making homes where there are none, A Thousand Splendid Suns ultimately is about the connections we make with one another and with various places and people we call home, and how those connections make (and break) our world.

What are your favorite books on leaving and returning? Let me know in the comments!

This post is adapted and republished with permission from my travel blog, You Are (Queer) Here.